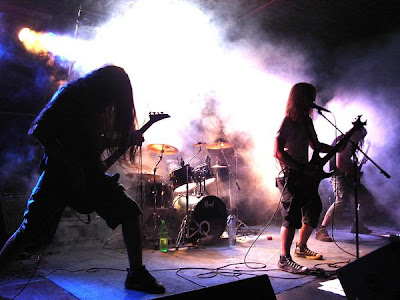 DEFIANT was originally formed 2005 in Pozega, Croatia, by Beretz(guitars,vox) & Kris(guitars). With much musical experience from the past they began writing material with lots of melodies, harmonies and dark lyrics. The main idea from the beginning was to play melodic death metal with Swedish influences. When Bole(bass) and File(drums)joined the band, line-up was finished. Defiant have developed their own and more commercial form of Death metal with groovy rhythms, melodic riffs, well played guitar solos and an aggressive vocal in focus. After lot of concerts and festivals, played with high-energy performance, the band made their debut album”The End of Beginning”in the autumn 2006

1. Would you like to tell us about croatian death metal / underground music scene ?
There is a scene with too many bands,but only 5-6 bands are make the scene,because there is no interest in metal like in other european countries…
2. 2006 to 2010, why it takes a long time to build a new album ?
Well,we have a Promo in 2008,so it’s not a very long time to keep busy our fans to wait our second album in 2010.And there was some changes in the band,because we need very good drummer on this new album so we cancel many gigs this year
so we can go in Studio to record some new songs  in a way that should be….metal.
3. Working on a new recording, could you tell us just little bit about new material ?
There will be some real old school melodies with some new sound of death metal.
4.Defiant call their self, “Croatian metal with swedish style”, tell us your favourite
musician.
Of course,But some old stuff like,At The Gates,In Flames,Dismember,Dark Tranquillity….
5. For selling point, and popularity or some other reason, some of musician or band covering the other band song. What do you think about that ?
Well,they cover for some own reason,if they think that ‘s OK i don’t have to say anything:D
6. If you could tour with one band, past or present, who would it be and why?
I think that could be Metallica or Slayer,because they are the names for themselves today…
7. City to city or world tour. Which one from your live performance you experienced that means much to the band.
World tour is the best,but it’s great to travel city to city of course…:D
8. Any pre-show rituals?
Drink some beers…a lot of beers…and smoke some weed…
9. What’s your opinion abut the music charts now, with the amount of manufactured boy/girl bands that seem to dominate it?
i don’t track this shit …
10. From the beginning until now, what made Defiant still focus on this genre. How does the music make you feel when you’re producing, performing, or listening to it?
It was hard work but we still could produce a nice death metal sound with a nice melodies…we give a high hope to this feelings:D
11.Your message to the metal fans ?
Keep it metal,it’s all you’ve got at the end….

Ehgo – For the Wounds